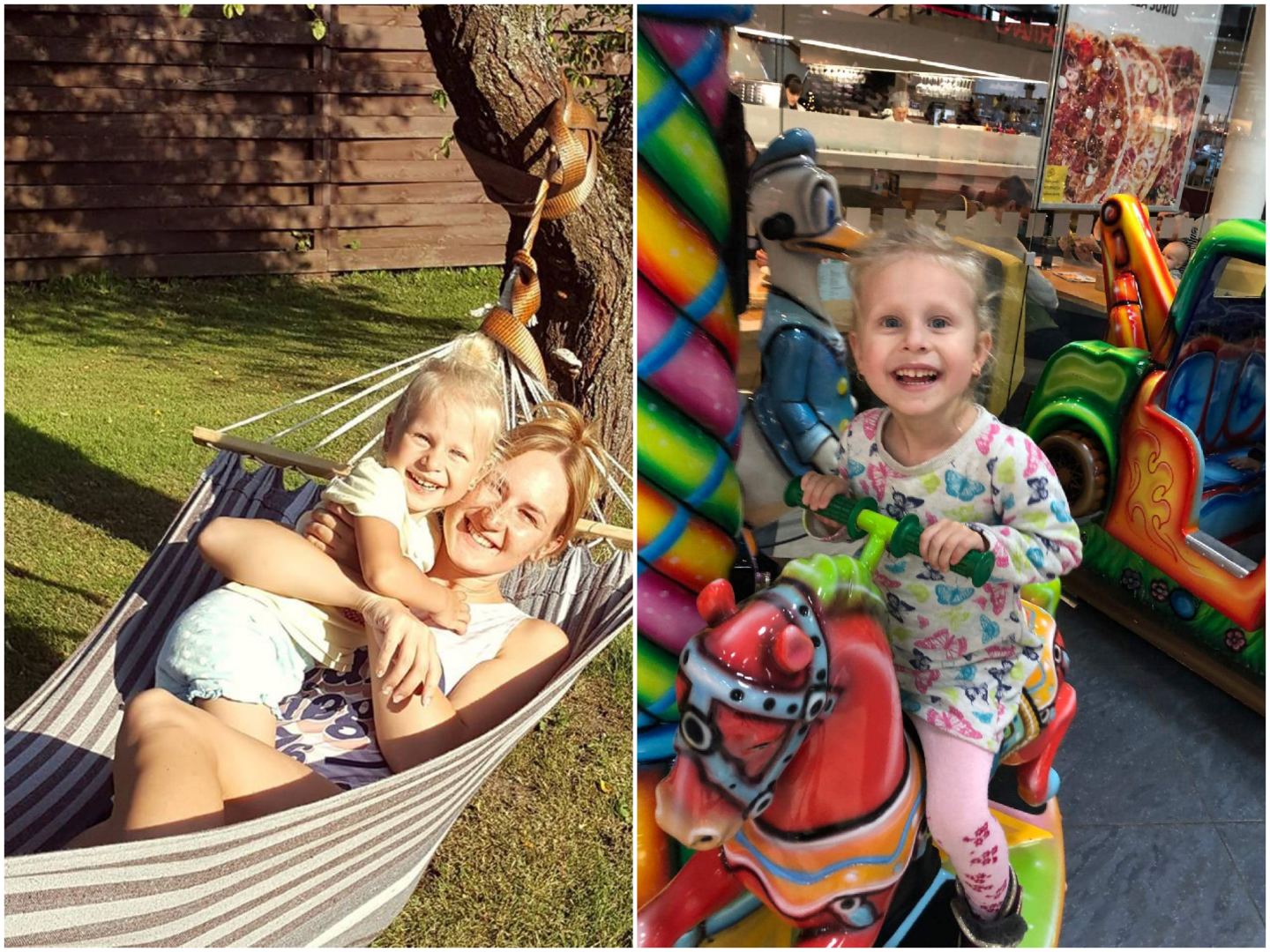 Emilija is almost four. She is an energetic and lively girl. Looking at her no one would ever suspect she is completely blind in one eye. She lost her sight due to a tumour in her eye which has reached almost 1 cm in diameter. Soon cancer will destroy her eye irreversibly. Emilija urgently needs to be operated on. The doctors referred her to Switzerland, but her family has no funds to go there.

Different colour of the eyes was noticed accidentally

It all started when one day in February Emilija’s mum noticed that one of her daughter’s eyes looks a bit different in colour with her iris turning slightly more yellowish.

“At first I didn’t think it was something bad. It happens that people have different-coloured eyes. I leafed through our old photos thinking I failed to notice it before, especially since the colour was only a little different and most likely not noticeable to an outsider. However, I couldn’t help but see that in the old photos her eye colour was even. I didn’t seek medical advice right away. But when we had to take Emilija’s brother for a check-up at our in-patient clinic, I took Emilija with me. After she was examined we were informed that she had a retinal detachment and is blind in that eye.

Our family doctor in Šilutė referred us to Klaipėda. That is where the first shock hit. After she was examined we were informed that she had a retinal detachment and is blind in that eye. When I heard that, I naturally burst into tears. I had some nagging thoughts before but I never imagined the situation was so serious. However, that was not all. As the doctor continued explaining she revealed even worse news: something was pushing on the retina and it might be a tumour”, Dovilė Dvarionaitė recalls the conversation with dread.

No eye-sight check-ups in an in-patient clinic

The parents didn’t have the faintest idea that their girl was blind in one eye. She never complained, was healthy, energetic and had no strabismus. It is possible she have been blind in that eye for some time and she might have thought it was normal. The doctors said the tumour might have been developing for approximately two years and the girl should have had at least three routine eye-sight check-ups; however, none had been done. Allegedly, if there were no complaints, no check-ups were necessary. Now Dovilė feels guilty for not inquiring in due time more specifically which tests her daughter needed to have. The tumour might have been spotted earlier before it destroyed her eye-sight.

“We went to the Eye clinic in the hospital Kauno klinikos. After the examination Emilija was to have an MRI test. We had to wait for three weeks. When the day of the test came, Emilija got sick and the test had to be once again postponed for another month. The waiting and being in the dark was a real struggle. If the problem is very serious, a month is too long a wait. I of course sought some answers on the internet. I found some stories of children with retinoblastoma, malignant eye tumour, but I still refused to see the symptoms in Emilija. I am trying to have a positive outlook on life and always hope for the best. So I tried to calm myself by thinking our case might not be so grave. Unfortunately, the MRI test showed that Emilija indeed has retinoblastoma. The doctor herself struggled to hold back the tears when she informed us about it. I found out it was a rather rare disease, more often affecting boys and usually diagnosed before children turn one. Our Emilija turns four in June, but she has been diagnosed only recently. We are so happy we caught it early and the tumour did not do more damage and is still treatable”, Dovilė explained.

Mum is paid only 100 euros and dad works abroad

Since the tumour was already pretty large, almost 1 cm in diameter, waiting was no longer an option. The girl had chemotherapy and an appointment in a clinic in Switzerland where such tumours can be operated was scheduled. There is no possibility to have such an operation in Lithuania. The cases are rare, there is no equipment or specialists. That is why children with retinoblastoma are sent to Switzerland to be treated by the most experienced specialists in this field. Treatment costs are covered by the National Health Insurance Fund of the Republic of Lithuania, but travel expenses, accommodation, additional medical means and medicines fall under the parents’ responsibility.

“The first course of chemotherapy went well. Of course, blood indices somewhat dropped, but the tests were not as bad as they could have been. The second and third chemotherapy courses were cancelled after consulting the Swiss doctors. We must be in Switzerland on the 14th of June. We are collecting all necessary documents, but we still need money. We are an ordinary young family, just making enough to make the ends meet”, the 25-year old woman admits.

Dovilė, who also has a one-year old son, gets only 100 euros per month. This is her children’s allowance. When she had Emilija, Dovilė was very young and after finishing school she had only 6 months of work experience and thus does not get any maternity leave benefits. Her husband works abroad to keep the family afloat. Thus even a loan for the family is not a possible option, while the duration of treatment in Switzerland might extend to around 2 years.

The trip is planned in two weeks

Dovilė admits, a psychological burden is too heavy to bear alone. But she is happy to have met so many good people along the way. They support her in any way they can. “We consulted the families with the same experience in Switzerland on accommodation options. The rent of the cheapest available accommodation near the hospital costs 130 euros. And we still don’t know how long the treatment is going to take. At first we might have to stay for a period of two weeks. All tests must be performed anew. We estimate that the first trip is going to require several thousands of euros”, Dovilė said.

The family does not have that kind of money, even though their trip is in mere two weeks. “I never knew we will be needing this kind of help. But it happened and now I ask all of you to help save Emilija’s eye. We simply cannot do it alone,” the young mother pleaded to the people willing to help. The Support and Charity Foundation Mamų unija supporting children with cancer and their families helps Emilija’s family raise the funds and Dovilė will be eternally grateful for each donated euro.

Treatment to be continued for two years

This family will need more money in the future. Other families advised Dovilė that in the beginning the visits to the Swiss clinic are going to happen every month or every fortnight and will become less frequent later on.

“I asked my husband to come along for this first time for support. I myself am not very outgoing, and I don’t know the language either… We will see how the things go later on. One of us needs to work, we won’t be able to travel together all the time. For now, the most ambitious plan of the doctors is to at least save the eye. Her eyesight is another matter entirely. The doctors say that it would be a miracle if her eye-sight returned, but we still hope for the best, against all odds. On the other hand, the good news is that cancer did not spread to another eye or her brain.

As one of the doctors said, we were struck by bad luck, but what can you do. But we are consoled by the fact that almost all children respond to treatment well. It is also a fact, however, that the parents never stop worrying and travel to Switzerland for check-ups every six months to rule-out relapse”, Dovilė said. 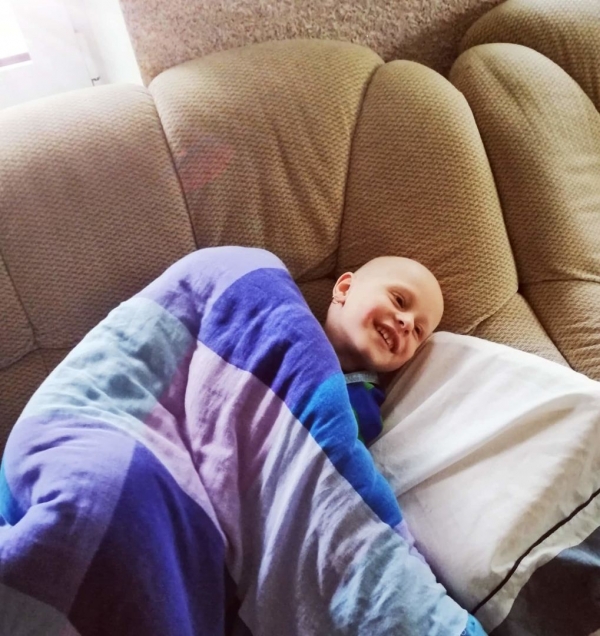 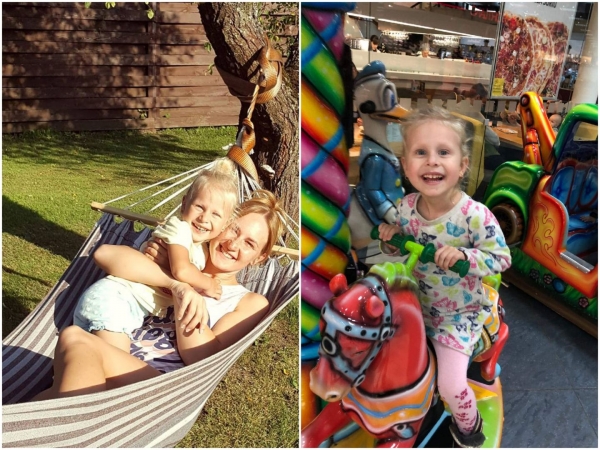 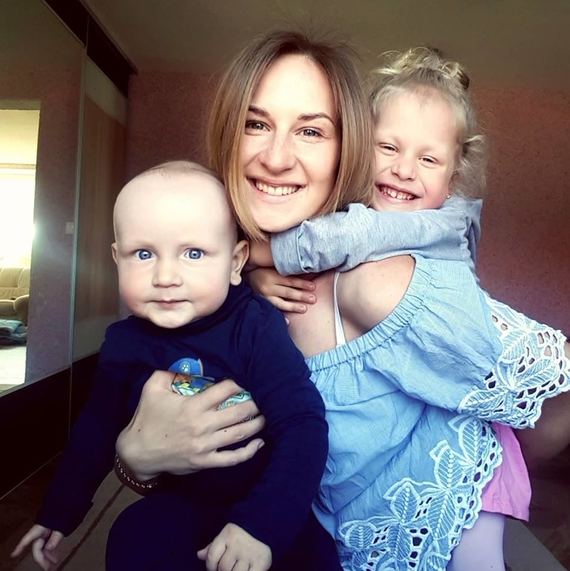